Let there be light!

Glow in the dark beetles. I’ve never seen anything like it. Absolutely magical. On Sunday night, I girded my loins(!), took my life in my hands, and braved the canal path alone after dark. In truth, it’s probably no more dangerous than during daylight hours but there we go. I arrived about 10pm and walked west from Old Fishery Lane. To be frank, I wasn’t expecting much. I wasn’t even sure I’d be able to spot them. But, wait, what was that, across the water, on the bank? There! Unmistakable. A green fluorescent prick in the darkness. I beamed back at it, smiling from ear to ear. There is something very special about any living thing that has the ability to defy darkness. It is the stuff of fairy tales, childhood imaginings and….ET’s finger! And, here it was, in real life, a beetle glowing bright and bold by a canal in Hemel Hempstead. Who’d have thought it?!


If that was the only Glow Worm (Lampyris noctiluca) I’d seen that night, I would have gone home enthralled, delighted and full of wonder. But, it wasn’t. I walked on a little further and suddenly there were two, then three and eventually many, many more lights in the darkness. A couple were right next to the path, at the base of stinging nettles, but I could get a clear view down to one of them. Initially, it was just a dazzling point of fluorescence but under torch light, I finally got to see the creature behind the magic. She had positioned herself on a dead leaf with her luminous under-tail fully revealed.

I suspect the comedy value of trying to photograph glowing beetles, buried in stingers, in pitch black, whilst also holding a torch, half wondering if you’re about to be pounced on by a random felon, is pretty high. Threat to life and limb aside, in terms of photography, I was using manual focus, no tripod, no ring-flash, manual settings and grappling with a torch - it’s a miracle I came away with anything useable.

But, the best was yet to come….

The later it got, the greater the number of lonely ladies to light their lamps. The males don't glow but they do have wings and they would be out now, scanning with their big, photosensitive eyes, finally choosing one of these light emitters for a mate. The adults only live a short time (14 days or so). The ladies glow, the gents fly, together they reproduce and then they die. All done during the months of June and July.

As I walked back along the path, I spotted a glow worm next to the lock gate. I expected to find it on a blade of grass. Instead, it was clinging to the brick buttress of the lock, tail fully ablaze. The very best views I could possibly have hoped for. Absolutely wonderful and the perfect end to a night that exceeded all expectations! 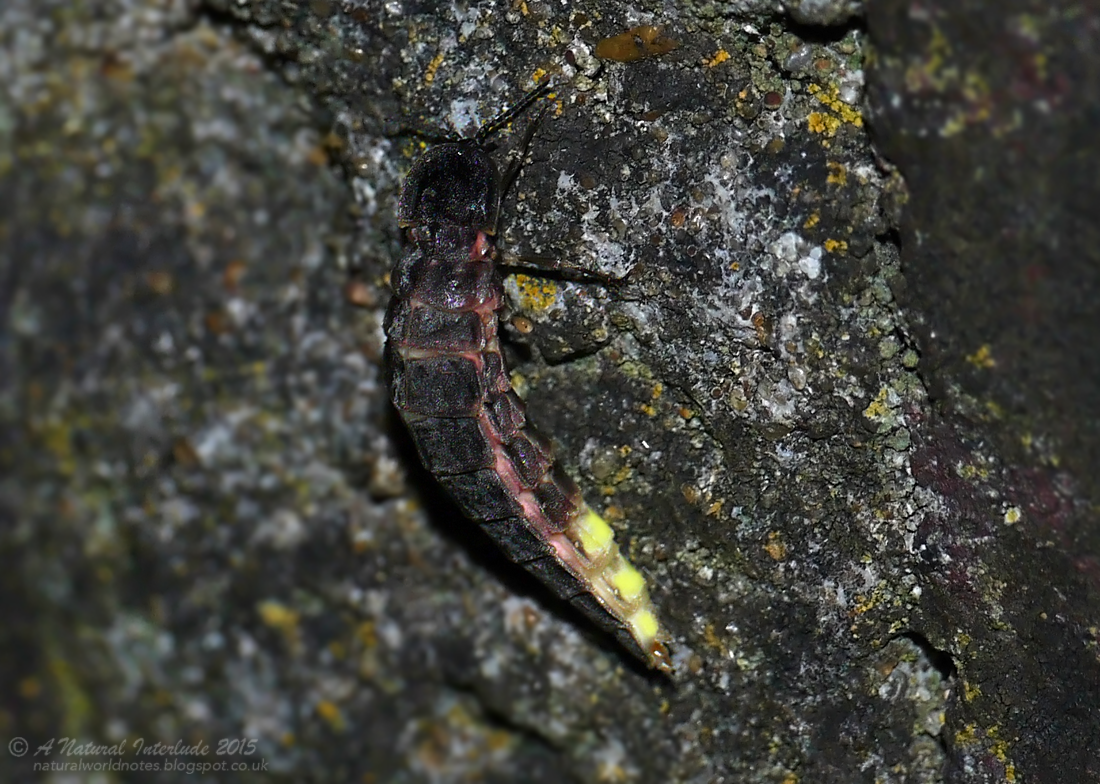