Little Egrets: no longer a feather in your cap


During the nineteenth century, the Little Egret was hunted to near extinction across north-west Europe. It was the height of the plume trade. The more magnificent and plentiful the feathers in a lady’s hat, the greater the fashion statement. The most highly prized adornments were the snowy-white plumes or “osprey plumes” of the various species of egret, known as “little snowies”. Those wishing to display their wealth and prestige would scour the milliner's, selecting a hat which featured the breeding plumes or “nuptial plumes”, grown during the egret’s breeding season. Even the men were not immune. A number of cavalry regiments in the British army incorporated osprey plumes into their uniform. A tradition which was stopped after 1889, thanks to the influence of the Princess of Wales. She had no doubt been influenced herself by ladies such as Emily Williamson who had just formed what we now know as the RSPB.

In spite of these ladies taking a stand against the use of feathers in hats and fashion, the plume trade continued to thrive at the turn of the century. It wasn’t until conservation laws protecting Little Egrets were introduced in the 1950s that the species began to "rebound strongly". It returned to Southern France, spreading north and eventually, in 1996 the first breeding pairs were recorded in the UK, including one pair on Brownsea Island in Poole Harbour. By 1999, there were between 30 and 36 breeding pairs at 9 localities in the UK. By 2006, that number had ballooned with more than 800 breeding pairs identified that year. And, in 2014, the first breeding pairs were recorded in the Heronry at Verulamium Park in St Albans. In June 2014, four nestlings were ringed there by Barry Trevis et al. This was the first ringing of Little Egret chicks in Hertfordshire’s history! This year, it seems one, two or more of the St Albans youngsters are finding their way over to the River Bulbourne in Hemel Hempstead. An individual photographed by Barry (under licence) as a nestling during ringing, is one of the new arrivals.


I read the Little Egret's colour-rings RBM; LAON(9); RAYN(H) on Thursday 3rd September by the River Bulbourne. That shorthand is translated as: Right Below the ‘knee’ Metal (BTO ring), then Left leg Above ‘knee’ Orange, with a Black (Noir) digit of 9; followed by Right Above ‘knee’ Yellow with Noir digit of H. This is the bird ringed as a nestling by Barry Trevis at Verulamium Park on 30 May 2015, shown in the photograph above. Barry let me know the BTO ring reads: GR24085

On Friday, another youngster turned up, with colour-rings RBM; LAON(H); RAYN(F). This was also traced back to Barry's ringing scheme at St Albans: ringed as a nestling on 9 May 2015; BTO ring GR24083. One of its siblings has flown to Coventry of all places.

This is the first report of either bird since ringing.

The light was awful but I got the following record shot of the two on Bulbourne Meadow on 4th Sept. They were accompanied by an unringed adult egret (still retaining its head plume). 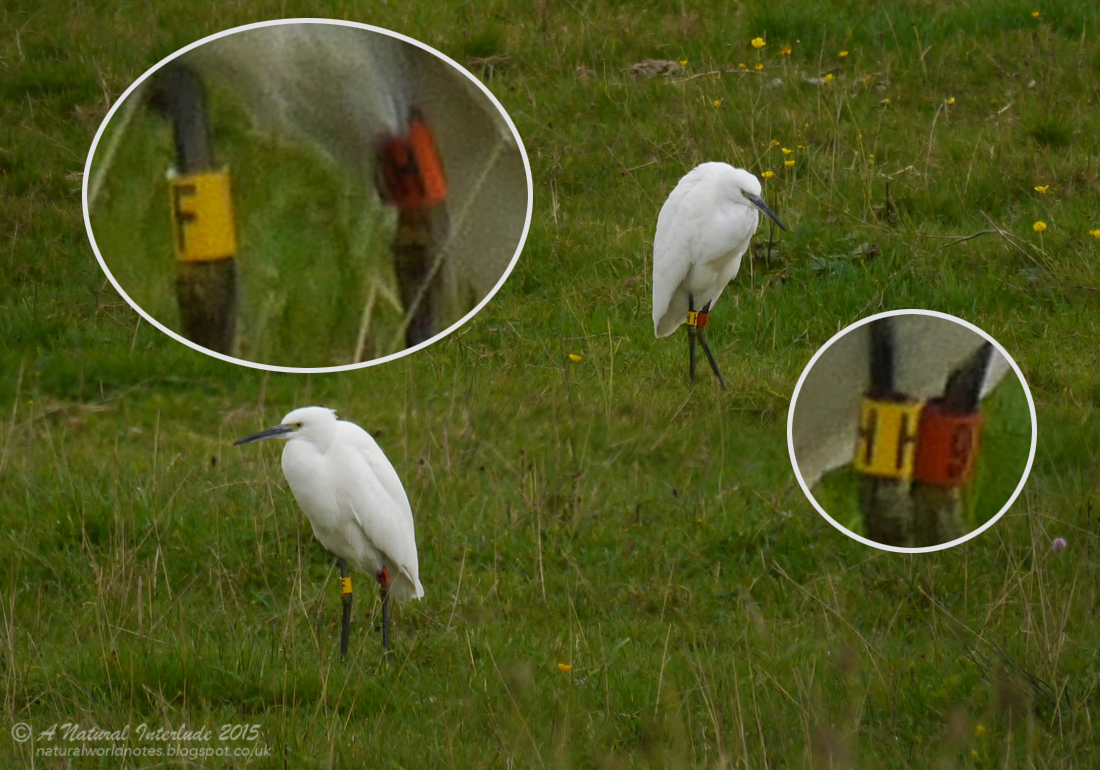 On Sunday, a 4th bird, another adult, without a head plume, had joined the group.


Below, left, the immature bird from St Albans, RBM; LAON(H); RAYN(F), compared to the unringed adult bird on the right which is missing its head plumes but something of the beautiful throat and back plumes remain (photographed 7th Sept, River Bulbourne).


Finally, I thought I'd include a location shot (below). This is where most of the little snowy action is taking place at the moment. Three of the four Little Egrets favour this stretch of the river, including the 2 colour-ringed birds. The adult with the missing head plumes primarily fishes further upstream. However, as it’s all open moor, the birds are easily flushed by walkers/dog walkers/joggers/children with footballs/etc and they can turn up anywhere along the river!


A big thank you to Barry for supplying all the ringing information, the history of Little Egrets in Hertfordshire and the use of his very cute photograph of the nestlings. It's heartening when the constant monitoring of regular birds at local sites is of value not only to myself and the Trust but to others like Barry involved in BTO research. I wonder how many more of the St Albans Little Egrets will venture this way!


Sauces? Yes please. Oh, you mean sources. Ok, here’s a list of the reputable and not so reputable websites from which I pilfered. If you're interested in further information about the history of Little Egrets or the plume trade these are a good place to start.