The Embrace of Common Toads

Hemel (BMT): I spent Monday morning with a crowd of frisky Toads. That’s not a euphemism for the sort of people I hang out with, I do mean the amphibians, warts and all. Bank Holiday Monday dawned bright and still. However, I wasn’t going to be fooled and frozen and had put on woolly jumper, hat and gloves. Needless to say, with temperatures reaching above 13 deg C, all 3 were eventually discarded. The warmth of Spring has finally arrived. Thank goodness.

Sunday evening I’d learned that Common Frogs (Rana temporaria) and Common Toads (Bufo bufo) had spawned on Trust land (many thanks to the keen observer). I don’t remember ever having seen Toad strings so their presence was too interesting a sight to resist. In fact, not only were there Toad strings, there were Toads and they were still locked in the mating embrace, amplexus, and spawning. 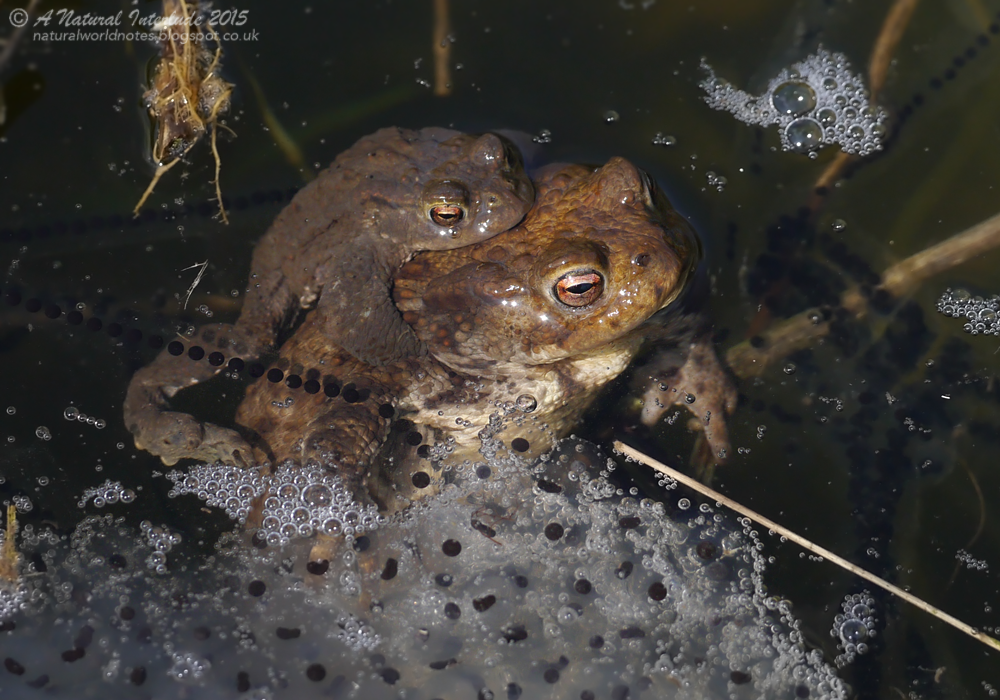 Much of the time, the pairs remained under water but it was still possible to see the string of double-stranded eggs emerging from the rear of the female (the string can also be triple-stranded, whilst single-stranded egg strings would indicate the far more rare Natterjack Toad (Epidalea calamita)). The male on her back releases sperm cells to fertilise the eggs as they are laid. 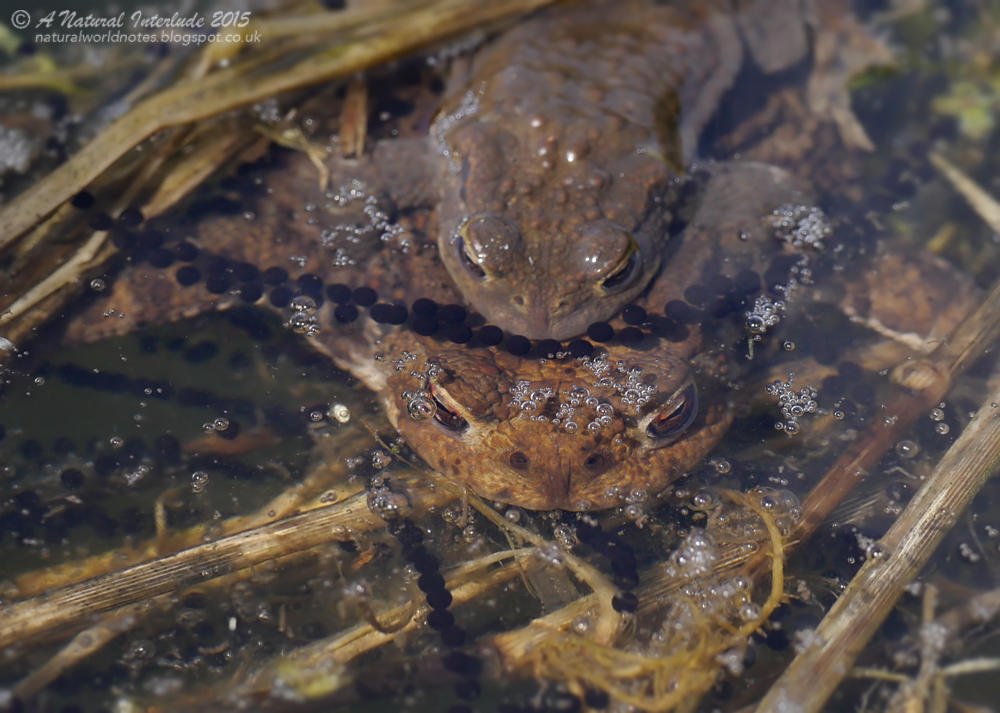 The whole process was extremely slow. I spent over 2.5 hours watching them and 1 pair produced perhaps 30cm of eggs. The female steered proceedings, at one point climbing up, through, onto and over vegetation and slowly, slowly going back into the water, her trail of spawn behind her. Somehow, she manages to manoeuvre herself and the male, so as to tie the spawn to vegetation. Very clever indeed. 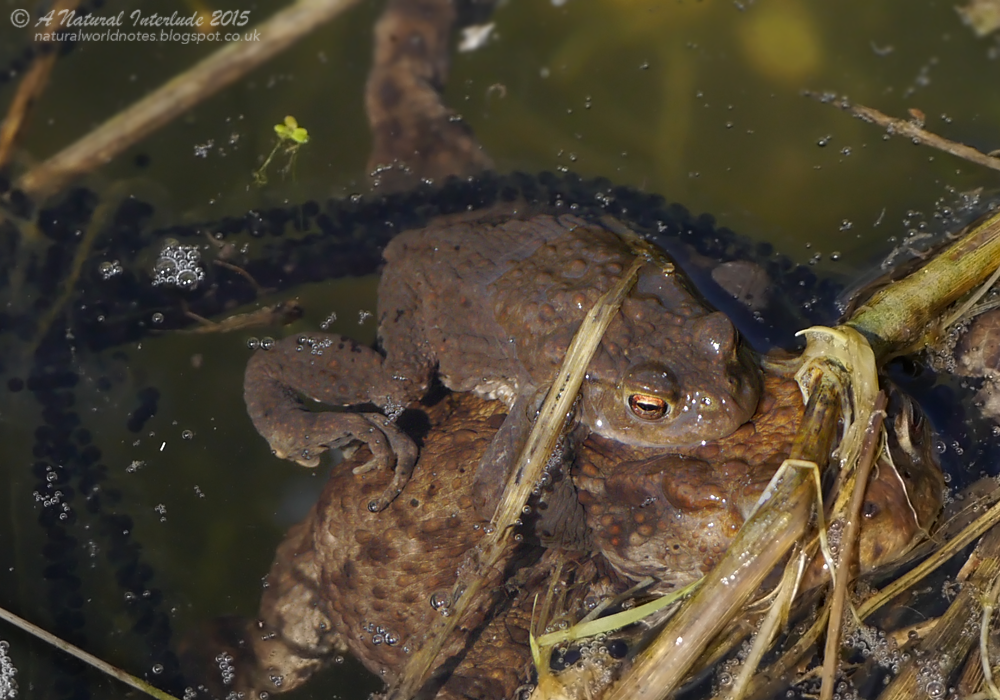 Toad strings can contain between 400-5000 eggs and be between 3 and 4.5 metres long. One of the Toad pairs on site had opted to spawn where there wasn’t any vegetation to attach the strings to. As a consequence, the pair were hidden and wriggling inside a large ball of eggs approx 20cm in diameter. I’m not sure how long that will last before perhaps a Fox gobbles it up.

Speaking of predators, I did wonder if maybe one of the female Toads had survived an attack of some sort. She had a very badly damaged right back foot. Unlike Common Frogs, Common Toads posses a fairly potent defence mechanism. When under threat, they secrete a foul tasting toxin, bufagin, from glands in the skin. Unfortunately, this doesn’t seem to dissuade species like Grey Herons, Mink, Rats and Hedgehogs from guzzling them.


Common Toads are nocturnal, solitary creatures, coming together only for the short breeding period, following hibernation. Adults return annually to the same breeding ground. And, research suggests that those adults will also have been spawned at that site and their spawn too will return there to breed. Their diet consists mainly of invertebrates caught with their sticky tongue using a “sit and wait” or “whilst I’m passing” strategy. Basically, they are opportunistic feeders, responding to movement.

Until this week, I knew next to nothing about Common Toads and it was interesting to discover that they are 1 of only 6 (or 7, depending on your view on re-introductions) native UK amphibians. It’s a small and select group made up of 1 or probably 2 species of Frog; 2 species of Toad and 3 species of Newt:


* Evidence suggests that there was/is a native species of British Pool Frog, which was re-introduced within the last decade, into East Anglia. There are, of course, a few non-native amphibian species around too but I won’t list those here.

So, within the first week of April, we’ve had both Common Frogs and Common Toads spawning. Having watched 4 pairs all still releasing and fertilising eggs, it should be possible to follow their progress quite accurately. Tadpoles should hatch within about 10-14 days from laying. It’ll take a further 8-12 weeks for the toadlets to fully develop, leaving the water en mass. And, it’ll be 4 years before these youngsters reach sexual maturity, ready to return here to spawn themselves. The cycle of life continues. 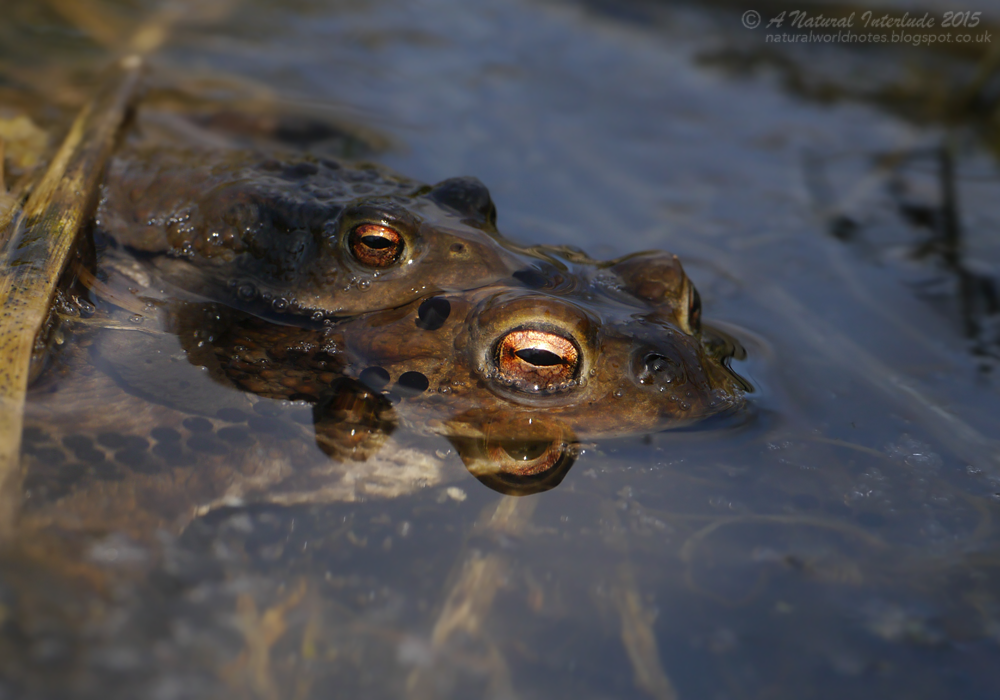