The year of the teeny weeny

As we hurtle towards the end of another year, I thought I’d better squeeze in a review of the last 12 months. As regular readers will have gathered, much of my time is spent locally, trying to keep up with (i.e. as best I can, monitor and record) the wildlife across land managed by the Box Moor Trust. I’m not alone in this endeavour. Experts in moths, in butterflies and in bird ringing - to name but a few - also regularly monitor species on the land. Together, as a team of volunteers, we’re simply hoping to be of use in conserving and managing the local wildlife.

So....this year, my main aim was to keep my eyes peeled for new species but also to ensure that there weren’t any obvious or significant losses. I wasn’t able to replicate the level or breadth of coverage that I’d managed in 2014 but it was still a rewarding year. I hope you'll enjoy taking a look back with me. First up, what's new Scooby-Doo?

(not previously recorded on Trust land & all teeny weeny!)

Sticking with the good news, it's on to the welcome returns...

(from my 2014 records or others' previous records)


Not photographed, but the swathe of c150 Bee Orchids (Ophrys apifera) flowered on Bovingdon Reach meadow in June. A very welcome return.

Feet firmly planted in optimism, there were just 3 species to give me cause for concern...


Thinking about the future, there are two very obvious species to note for 2016

Finally, a big thank you to those of you who have encouraged me, shared snippets from your own experiences and/or come alongside with kind or interested comments, either on or offline. It does make all the difference to know that the bits and pieces I put together might actually be enjoyed or be of use or interest. Thank you.
at 13:25:00 8 comments:

Email ThisBlogThis!Share to TwitterShare to FacebookShare to Pinterest
Labels: Review


Bovingdon (BMT): The weekend doesn’t seem to have incorporated a great deal of daylight. Darkness, yes. Drizzle, yes. Rain, yes. And, at the Brickworks, mud. Lots and lots of mud. I also have a sore throat, which of course adds to the general sense of gloom. However, in spite of all that, I thoroughly enjoyed my muddy wander this morning.


As I walked through the mudow (that’s mud/meadow) (top left "view"), a Song Thrush was singing in the trees to my right. A crystal clear, full-bodied melody of flutes and whistles, projected far and wide. It was better than sunshine. Up ahead of me, I spotted another 5 Song Thrushes together in a bush and, behind me, 2 more. There were at least 10 around the site. A flock of 40+ Goldfinches were feeding on thistle seeds, along with Chaffinches and a mix of Tits. Last week, I’d counted at least 20 Blackbirds within the scrub and, easily, 5 Green Woodpeckers. 3 Jays gave me glimpses of white rumps and a couple of Fieldfare swapped one tree for another. Towards the end of my squelching, I chanced upon a Robin quietly singing his pretty sub-song. It was as though he was testing the air to see if anyone was listening. Delicate yet sure and another ray of sunshine.

The main reason for my visit today was to retrieve the trail camera, which had been out overnight. I modified the set up slightly by a) moving the camera much closer to the burrow entrance and b) reducing the glare of the red LEDs with some sheer red fabric taped over the top. As before, I aimed the lens into the distance, again to reduce glare, and I put out a few peanuts and sunflower hearts to entice little creatures to do more than dash, dart and streak across screen. The results weren’t bad.

So, the mystery homemaker is definitely a mouse and we have at least 2 living in this burrow. They’re likely Wood Mice (Apodemus sylvaticus) but I think only daytime footage would clinch it (fur colour). I confess, I had hoped for Bank Voles but, even so, it’s been useful to get some experience with the trail camera and learn more about the habits of Wood Mice.
at 19:13:00 4 comments:

Snapshots from the cycle of life 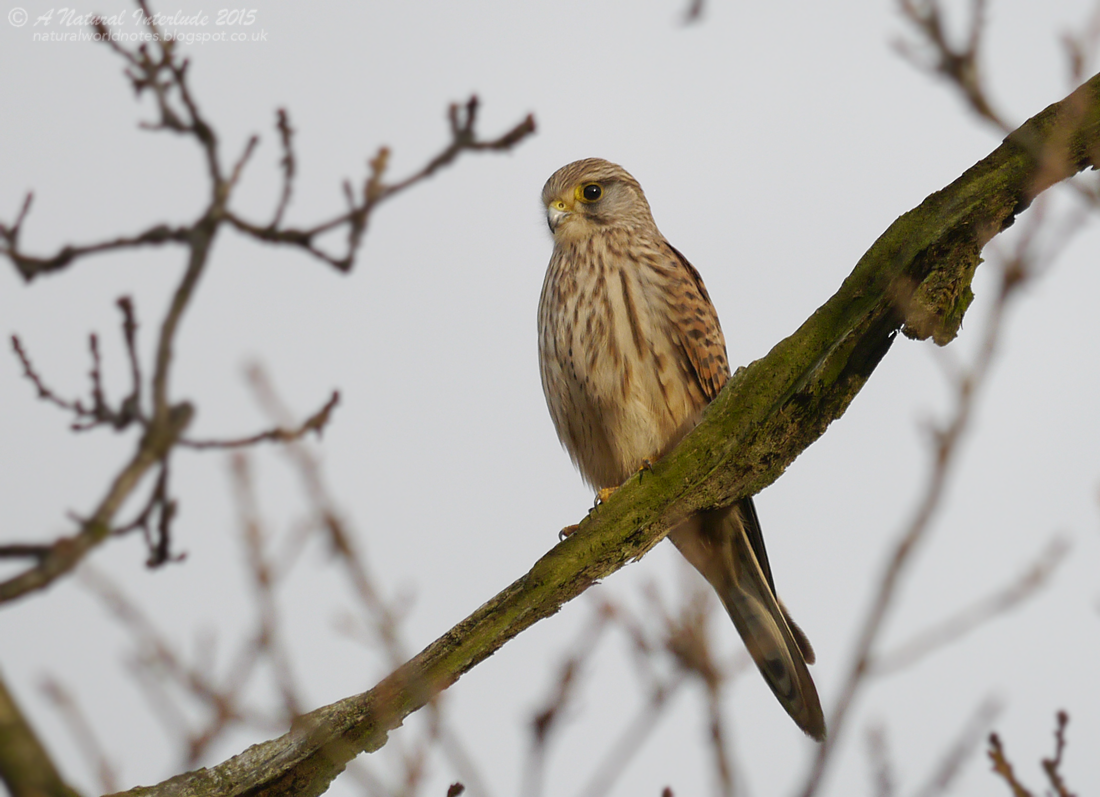 Hemel & Bovingdon (BMT): I thought you’d all be pleased to hear that a) no-one has nicked the chicken wire off the Kidney Vetch and b) the Kidney Vetch has not yet been eaten by slugs or rabbits. So far, so good.

Out on Blackbirds Moor this week, a Mistle Thrush has started singing. According to garden-birds, they’re the first of the Thrushes to begin singing in the lead up to spring, getting started in December. The Blackbird follows and then the Song Thrush. I really do love how nature seems to approach winter with outright optimism: buds are already formed, birds are starting to sing and the year’s end is still 3 weeks away. It’s as if nature shouts “spring is coming!” from the moment it ends until the moment it arrives.

Wednesday bucked the trend and was actually sunny. Blue sky, heart-lifting sunny. Earlier in the week, the Siskin flock by the canal had increased to more than 30 birds and I hoped that I might be able to get some photographs or better video footage. I achieved neither. Either the birds were obscured by cones, catkins or other inconsiderate portions of tree. Or, the light was so harsh and awkward that only bits of bird were visible whilst the rest was lost in pitch black shadow. This photographic farce was mercifully curtailed by the flock only staying about 10 minutes out of the hour or more I was there. By mid-morning, it was time to do something else. 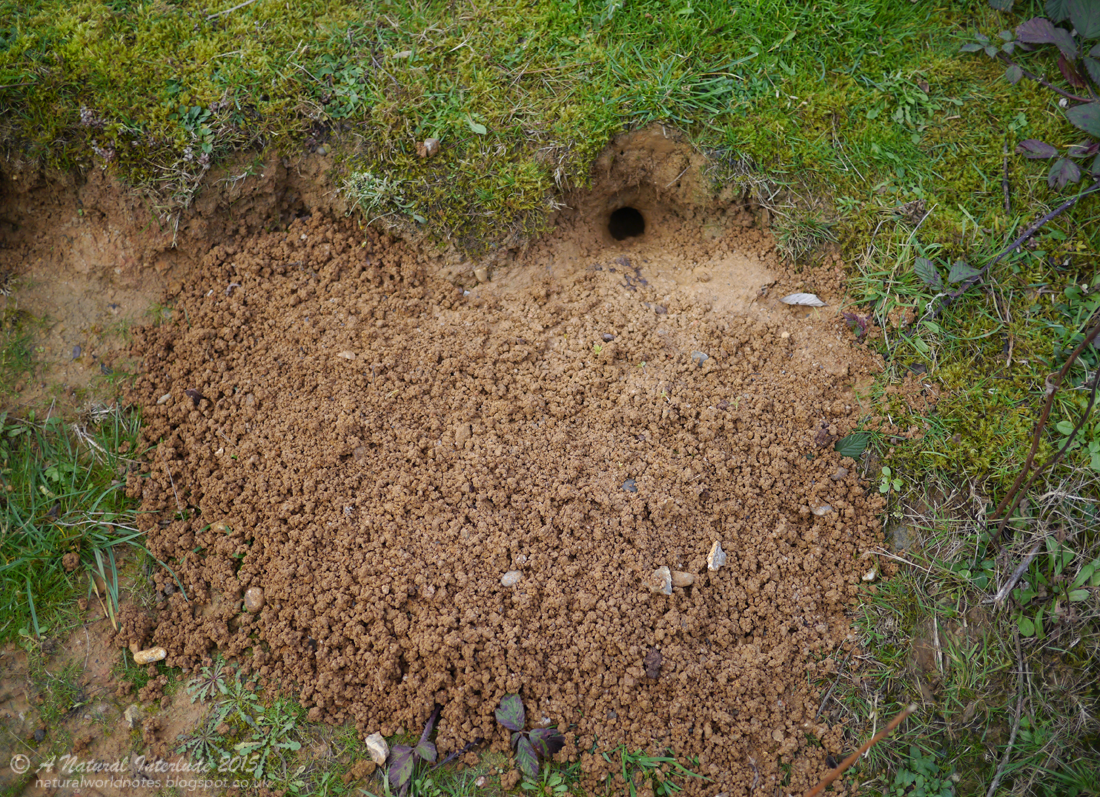 At the Brickworks, two curious burrows have appeared. Each is located on the side of a bank of earth, with a circular entrance 40-45mm diameter (see above). Something has obviously dug extensively, piling up soil like larva in front of the holes. Yesterday, I set up a camera trap to run overnight, hoping to solve the mystery.

Early this morning, I was greeted by the resident Kestrel (top photo) and the trap had been triggered. Only 2 clips were of any use. A couple of more knowledgable friends suggest the small mammal might be a Wood Mouse. Having encountered youngsters on site back in July, we know they're present. Better footage would certainly help, so, if I can achieve that ahead of Christmas, I will. With a bit of luck, the beady-eyed Kestrel won't have eaten them all before I can identify them!

If you build it, he will come

Hemel & Bovingdon (BMT): I’m fairly certain that the Box Moor Trust didn’t hear whisperings in the cornfield à la Kevin Costner in Field of Dreams. There is no predestined certainty here but the passionate hope is that by creating a habitat suitable for the rare Small Blue butterfly, it might just wander on over to Trust land and find a safe haven.

Yesterday morning, 4 of us pulled on our wellies and got properly muddy planting Kidney Vetch at Bovingdon Brickworks. This was the second morning of furious autumn industry. At the end of November, more than half a dozen enthusiastic helpers (from trustees, staff and volunteers) had planted some 350 Kidney Vetch (KV) seedling plugs and sown KV seeds at Roughdown Common. Across both locations, the plants need to survive rabbits, slugs, frost and anything else that might get thrown at them this winter. Then, in the spring, they need to bed in, germinate and reproduce. If the plants and seeds manage all this then they might, just might, attract Small Blues to the sites. Forget a field of dreams, a vigorous patch of Kidney Vetch would do nicely! 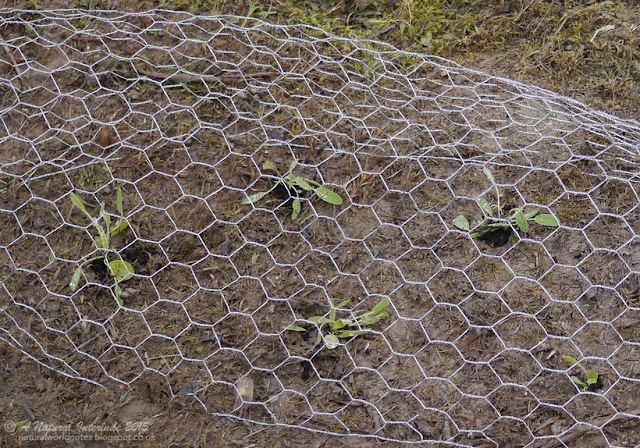 For the complete Small Blue story, check out the “BMT Small Blue Project” tab above. If hope and the sheer longing to see rare and scarce wildlife recover were enough, we’d be guaranteed success. As it is, we’ll have to wait and see...
at 10:26:00 6 comments: