H is for Little Egret


Hemel (BMT): It is bizarre but it seems that only Little Egrets ringed with the letter “H” turn up in HhhhhhHemel HhhhhhHempstead. And, I first find them on days when the sky is thick with cloud and the light is flat and all is gloom. Perhaps they decide I'm in need of novelty to compensate for days like that. Yesterday was the arrival of bird number 3. Colour-rings LAON(H); RAYN(C). BTO ring GR24066.


The bird was ringed as a juvenile (age code 3 i.e. hatched earlier that year) at Lemsford Springs on 2 September 2014. It hung around Lemsford for a while before heading NW to Leagrave Marsh in Luton in February, and then, in May, was spotted at Trimley Marshes in Suffolk! A month later, it was back in Bedfordshire, at East Hyde, before finally taking it’s little orange “H” to Hemel Hempstead.

It’s no Red-flanked Bluetail or Hume’s Leaf Warbler but these ringed birds add a little interest to my walks along the River Bulbourne. I enjoy the simple satisfaction of spotting them, getting close enough to read the rings and adding to the growing picture for each individual. However, it’s not always straightforward. There is a quirk to the colour-rings. 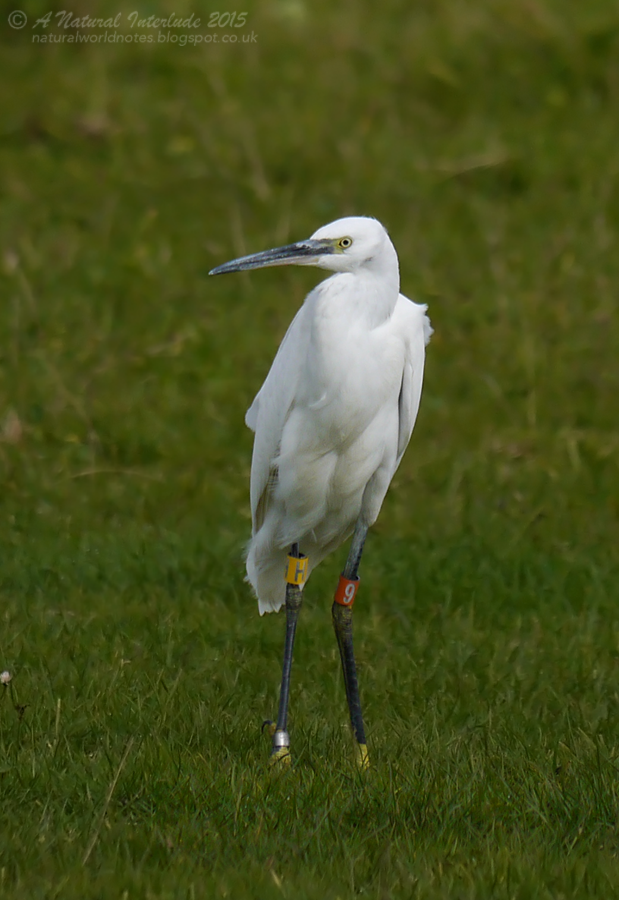 In the photo above, you could be forgiven for thinking that the Little Egret’s left leg has an orange colour-ring with a white “9”. Actually, both the “H” and the “9” are written in black. It’s not a photographic/digital artifact either. In the field, even when the bird is walking or shifting position, the letter/number can consistently appear pure white to the naked eye. I spent a few head-scratching sessions with this bird, wondering what were the chances of a second individual, turning up at the same site, with the exact same letter/number combination, but written in white rather than black. The mystery was solved when I saw that “both” birds had their right hind-toe caught in the metal BTO ring i.e. it was the same individual. This must have happened soon after ringing. It looks mighty uncomfortable but the bird seems to be absolutely fine.


The obvious Siskin passage continues, with another handful of birds flying SW over the river yesterday. It looks like the rest of this week is more gloom and drizzle, so, who knows, perhaps another ringed Little Egret will pop in.

Many thanks to ringing scheme co-ordinator, Barry Trevis, for the details and background on these Little Egrets.

The River Bulbourne is currently hosting:

The blog post relating to the birds first spotted in September can be found HERE.
at 16:25:00 4 comments:

The clash of Kings on the River Bulbourne

Hemel (BMT): It’s that time of year when monogamous Kingfisher pairs separate and set up alone to see out the winter. The young too disperse, finding their own stretches of water to patrol and to sustain them through the colder months.

I had been away for a few days, attending a family funeral, so, in spite of the gloom and drizzle yesterday afternoon, it was good to catch up with life along the river. One of the colour-ringed Little Egrets is still a regular fixture, together with the two adults. And, of course, there are the Kingfishers, now in the throws of establishing and defending winter territories.

Just after 3pm, beside the river on Harding’s Moor, approaching Station Road, I could hear two Kingfishers having a right old barney. Insistent calling from both parties and, when I finally located the female, perched precariously on grasses overhanging the river, she was posturing continually, bowing her head and staring with murderous intent.

Disturbed by a man looking for fish(?!), the birds flew up in to the tree on the opposite bank and here they remained for at least the next 2 hours, barely moving except to posture, flinch and mirror one another. Apart from the rise and fall of their chests as they breathed, you could be mistaken for believing they were playing statues - to move was to lose the battle. 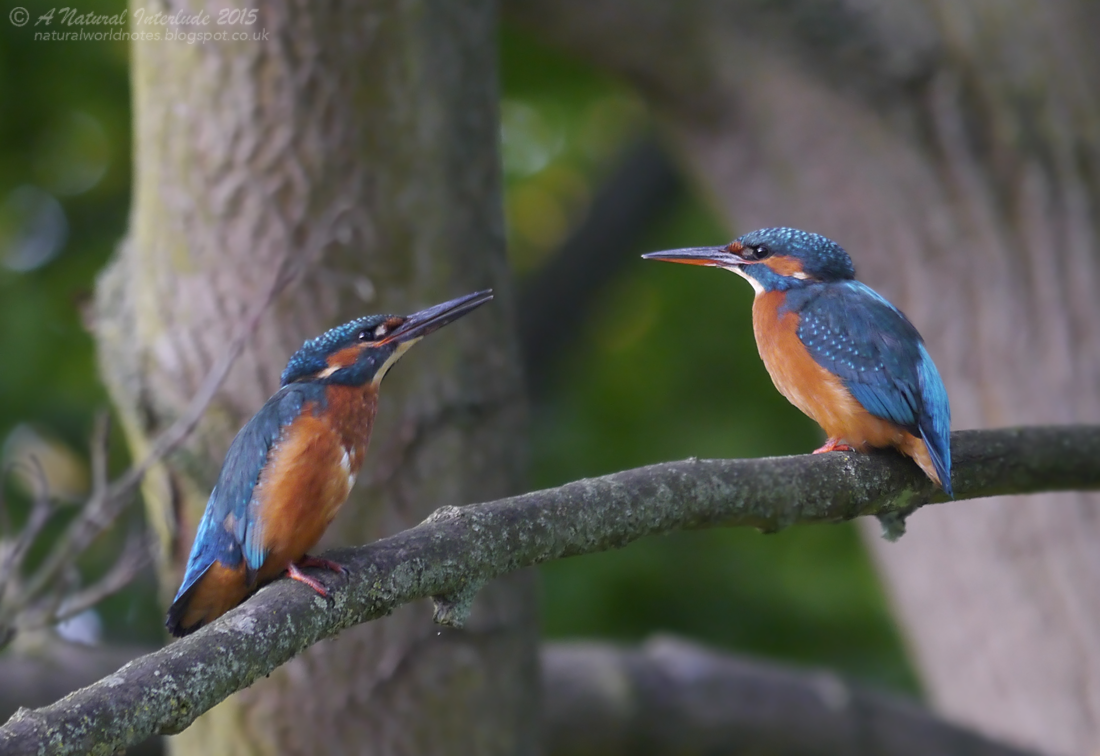 The female had clearly staked out her spot but the male seemed to slowly but surely decrease the distance between them. Unfortunately, it started to rain quite heavily towards 5pm and I had to call it a day, leaving the pair locked in this subtle but fierce battle. I wonder if this location on the river is a boundary between adjacent territories and they were asserting their lots? The male, I think, is a first winter bird and the female an adult. Perhaps mother is trying to encourage son to stop raiding the food cupboard and go out and find his own supplies! I had watched the female fishing downstream last week, again in the gloom and drizzle.


One of these days, I’ll come across the Kingfishers when there’s enough light for nice photographs at a reasonable ISO. In the meantime, here are some 90 seconds from the 2 hour stand-off, to give you a flavour of the determined patience of these birds when holding their ground. The tension of battle is palpable but made all the more obvious when the young male jumps at the sound of the female’s sudden call. Their focus was such that they completely ignored me, standing less than 10 metres away, as conspicuous as a pink elephant.

I made the most of last Sunday, knowing that during the following 3 days we were in for a thorough soaking. A little clichéd perhaps but the stillness and warmth of the day created a kind of calm, gentle and quiet sense of rescue as I walked the paths at the Brickworks in the afternoon. Some days you feel more vulnerable than others but find that you are met, in this tender state, by a natural world which is perfectly in tune. There are no harsh, discordant notes or searing shocks to the system, only harmony and a gentleness of light, warmth and colour. You take it in with ease and relief, and your breathing slows, your muscles relax and your mind expands.


And....then you spot the first blooms of Common Toadflax (Linaria vulgaris). It may well be a common plant of “waste grounds, grasslands, roadside verges and hedgerows”, but it’s bright, sunny and delicious to behold. It’s common name of “Butter and Eggs” is no accident. It’s all yellows and oranges and frilly and interesting. You can’t help but take a closer look. 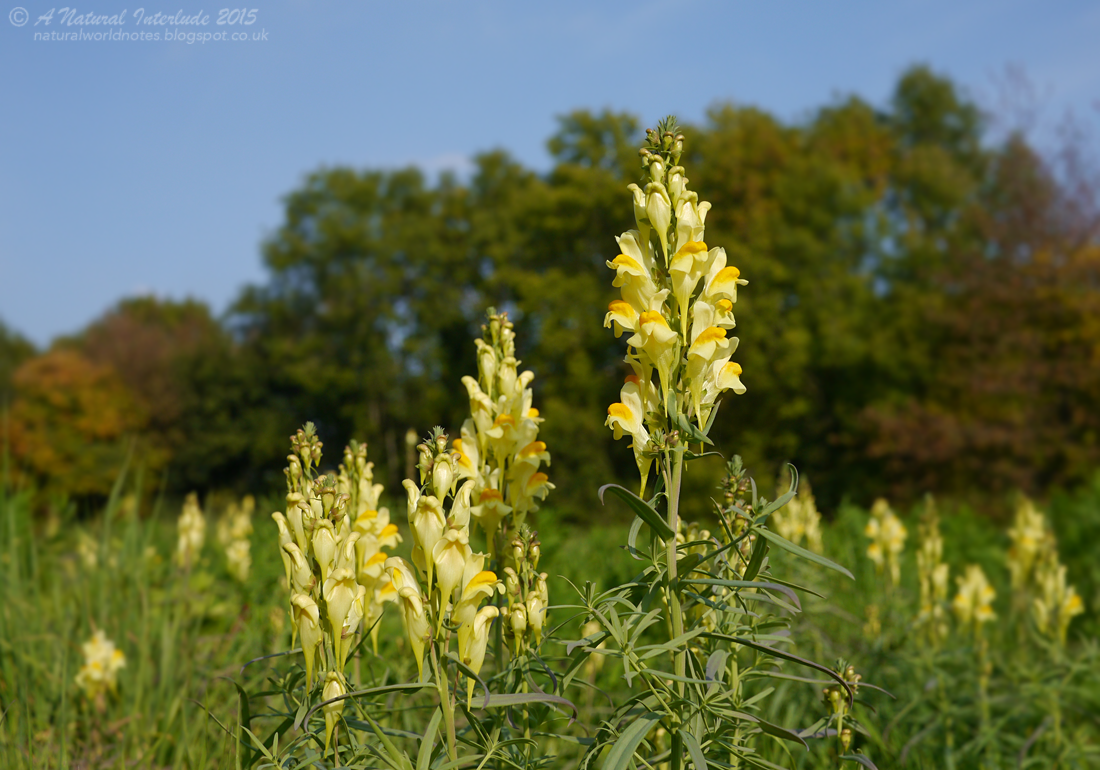 As the days shorten and the trees lose their leaves, these hardy bloomers may well go on flowering right through November. For the herbalists amongst us, if you happen to be bloated or constipated, this yella fella is right up your street. It has strong laxative and diuretic properties, as well as containing painkilling and anti-inflammatory effects to help heal wounds (not that I’m advocating Toadflax stew or the like, you understand). Yes, it’s common, but at the right time, in the right place, it can feel like you’ve stumbled upon trumpets of autumn sunshine. 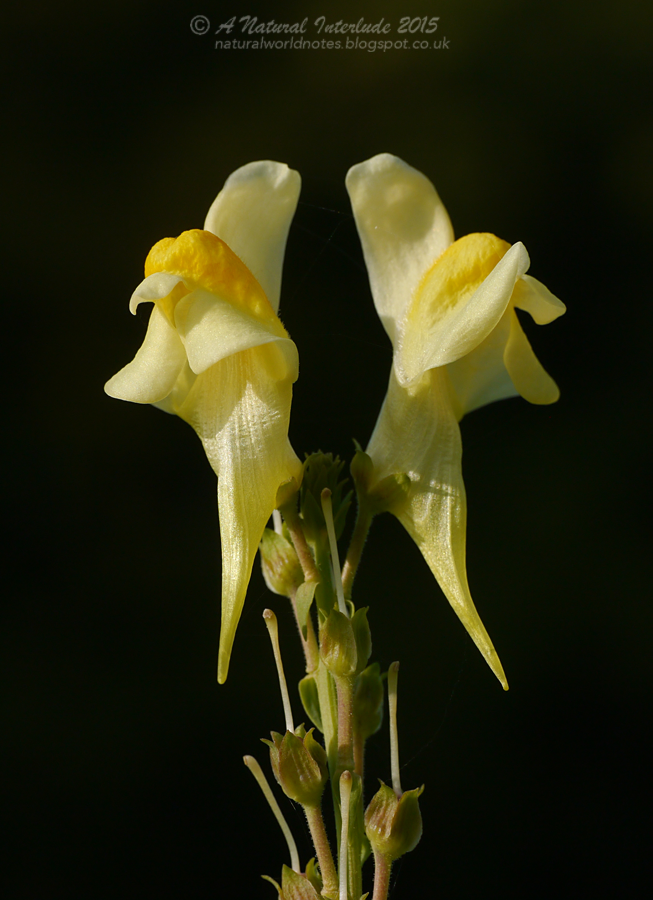 Ring-necked Duck: another quacker at Startops

Tring reservoirs: Hmmm....with a pun like that in the title, is there any hope for the ensuing post? I’ll crash on regardless.

I’ve been about as dynamic as a hibernating hedgehog for the past few days. The chance of anything vaguely creative, even accidentally finding its way here, is pretty slim. Still, with a self-imposed goal of hitting the publish button at least once a week(ish), I’ve climbed out from under the duvet, left Don in yet another whiskey-induced spiral of self-destruction (Mad Men, season 6) and gone to see a bird.

At first glance, you could be forgiven for thinking that this is just a Tufted Duck, without a tuft, and with the addition of a couple of flashy bands around its bill. It isn’t, honest. It’s a very smart American, male, Ring-necked Duck. It turned up at Wilstone reservoir on Friday evening, disappeared Saturday, and reappeared today at Startops, long enough for the young, the old and the middle-aged and infirm (i.e. me) to drag themselves out into the blissful warmth and sunshine, and be dazzled by rarity. The last (and first) one I saw at the reservoirs was a dull juvenile at Wilstone in 2013. Prior to that there had been less than 15 county records.