I'm not back & sunlit Buntings

I’m not back. I’m just kinda popping my head around the door. I’m here but I’m not here. And, whilst I’m here but not here, I thought I’d see if I could surreptitiously pave the way for continued blogging whilst unwell which doesn’t involve invading my own privacy too much.

I’ve lived with unipolar depression for most of my life. It’s been an unwanted and unwelcome appendage-to-my-psyche for as long as I can remember. It didn’t come alone either. It brought mates (disorders of anxiety etc) and, given the right circumstances, it multiplied into other more extreme and incapacitating conditions. Whilst I’m not able to work, I have found a way to live a small, quiet life which is mostly stable and functional (and isn't quite as pitiful as it sounds!). At times, you might even describe me as being useful to society, which, believe me, feels like something of a miracle.

Living with a mental illness is to have a constant and unpredictable companion. Sometimes it’s fairly quiet and easy to ignore. Other times, it’s like a ravaging cyclone: completely engulfing, completely destructive and utterly overwhelming. At the moment, it is tugging at my shirt sleeves like a needy 4 year old. It’s distracting and limiting and requiring most of my attention but, every so often, the chaos clears a little and I can do more than put one foot in front of the other, like Wednesday morning’s frosty, sunlit walk along the River Bulbourne. 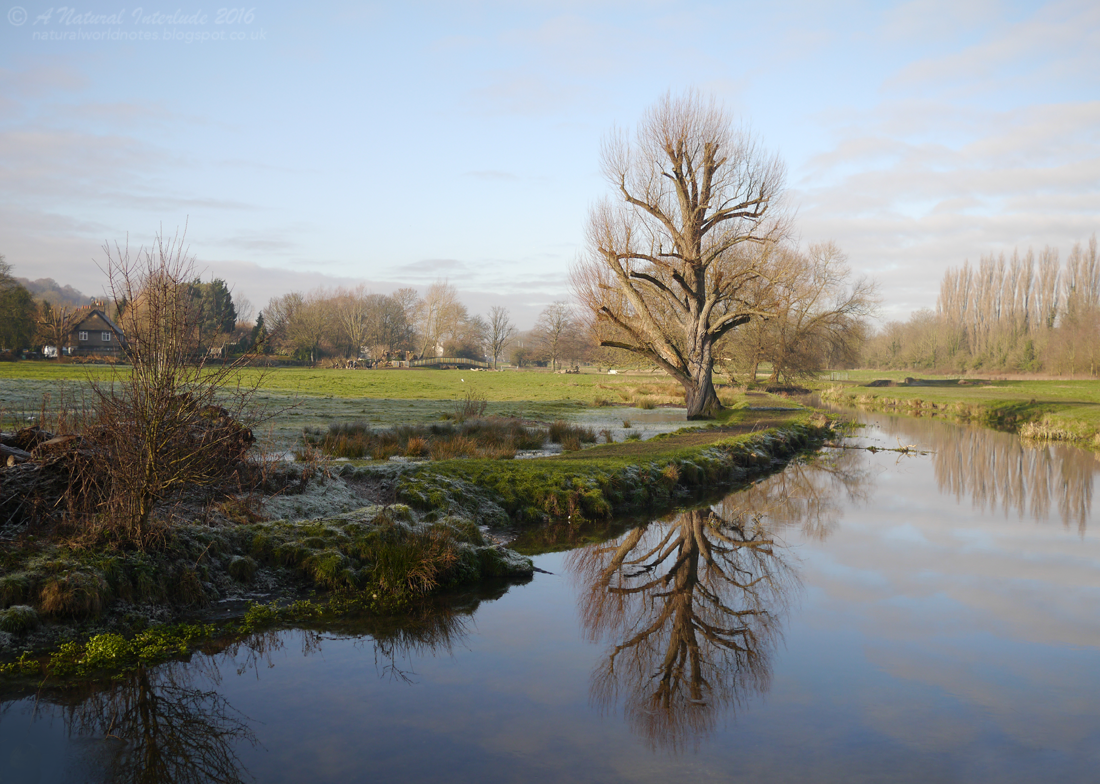 Many years ago, I read William Styron’s Darkness Visible: A Memoir of Madness. I can’t for the life of me remember whether I thought it good/bad/helpful etc, but I did mark up a few paragraphs.

“Depression is a disorder of mood, so mysteriously painful and elusive in the way it becomes known to the self - to the mediating intellect - as to verge close to being beyond description. It thus remains nearly incomprehensible to those who have not experienced it in its extreme mode.”
― William Styron, Darkness Visible: A Memoir of Madness

At the heart of depression is pain. Extreme, unrelenting, psychic (of the soul) pain. I think the best description I’ve ever read was that it feels like someone is holding a naked flame to your soul. It is pain so acute and otherworldly that, at its worst, it is an effort even to breathe, never mind stand. Being conscious is excruciating: you’ve lost all capacity to feel comfort, hope, joy, interest, etc. It is, I think, the closest thing to hell on earth.

Thankfully, I’m only at the tugging-shirt-sleeve rather than ravaging cyclone stage. And, last Wednesday, I was able to enjoy a group of feasting Reed Buntings in the tiny Fishery Moor reed bed. Had they been difficult to photograph or required delicate fieldcraft to observe, I’d have given up. As it was, with the sun behind me, the birds remained perched on the tops of the reeds, skilfully extracting the seeds. There were at least 8 of them (my highest count here) and there could well have been as many as 12. I managed to photograph 5 of them.

One of the biggest difficulties with depression is that it is an invisible illness. It’s not possible to see how someone’s thoughts and emotions have drifted and skidded into an obscure realm of darkness, confusion and thick, treacle-like chaos. You can’t see the constricting anxiety and the trapped, walls-closing-in-on-me feelings; nor the struggle to remember what the world used to look like before its sinister transformation into a twisted, dark, distorted reality where nothing is as it should be. There is no comfort, no joy and no clarity. Just a heavy, suffocating blanket of confusion and pain. I am so very glad that I write these descriptions largely from memory and from the transitory echo that is my current experience. It is perhaps easy to understand why depression is so deeply isolating.

OK, time for a photo of a Goose, I think. Another from my sunny Wednesday walk. By the Hemel “magic roundabout”, on Plough Gardens & Balderson’s Moor, there is a resident flock of c40 Canada Geese. I mostly ignore them but this week they seemed like a nice, easy target. 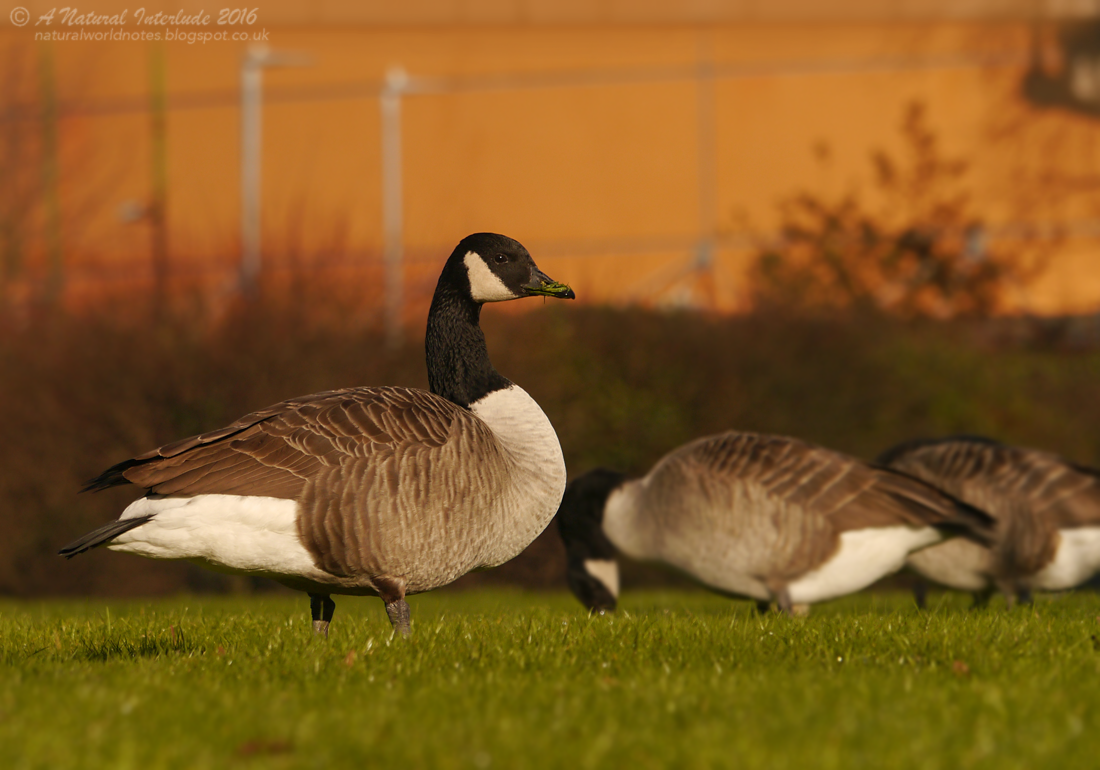 The strange thing about depression is that you really do feel as though you’re walking around with a gaping chest wound, heart exposed to the elements. You feel intensely vulnerable and flinchingly raw. It is made all the more painful by the fact that no-one can see it. It’s no wonder that bursting into tears “for no apparent reason” is the all too frequent consequence.

William Styron shared this sense of wounding and I think his exploration is worth sharing in full (skip it, if you're pushed for time). After that, I’ll bring this blatant departure from natural history to a close.

“In depression [a] faith in deliverance, in ultimate restoration, is absent. The pain is unrelenting, and what makes the condition intolerable is the foreknowledge that no remedy will come - not in a day, an hour, a month, or a minute. If there is mild relief, one knows that it is only temporary; more pain will follow. It is hopelessness even more than pain that crushes the soul. So the decision-making of daily life involves not, as in normal affairs, shifting from one annoying situation to another less annoying - or from discomfort to relative comfort, or from boredom to activity - but moving from pain to pain. One does not abandon, even briefly, one’s bed of nails, but is attached to it wherever one goes. And this results in a striking experience - one which I have called, borrowing military terminology, the situation of the walking wounded. For in virtually any other serious sickness, a patient who felt similar devastation would be lying flat in bed, possibly sedated and hooked up to the tubes and wires of life-support systems, but at the very least in a posture of repose and in an isolated setting. His invalidism would be necessary, unquestioned and honourably attained. However, the sufferer from depression has no such option and therefore finds himself, like a walking casualty of war, thrust into the most intolerable social and family situations. There he must, despite the anguish devouring his brain, present a face approximating the one that is associated with ordinary events and companionship. He must try to utter small talk, and be responsive to questions, and knowingly nod and frown and, God help him, even smile. But it is a fierce trial attempting to speak a few simple words.”
― William Styron, Darkness Visible: A Memoir of Madness

And so, there we have it. I really did not intend to write such a mammoth post. I hope you weren’t in a hurry! Well done to anyone who has persevered this far…and thank you. I’ve only touched on a few of the psychological symptoms of depression and I inadvertently shared one of the many physical symptoms at the beginning of January - the brutal insomnia. Many years ago, at its worst, I was taking a nightly cocktail of tranquillisers, sedatives and sedating antidepressants in order to get the bare minimum of sleep. It was not pretty. Anyway, enough of the intricacies of mental health…how about a Crow harvesting grassy icicles from a frozen flood on Fishery Moor. There was a group of 4 of them all gingerly traversing the ice and breaking off the shimmering protrusion, presumably to eat/drink. 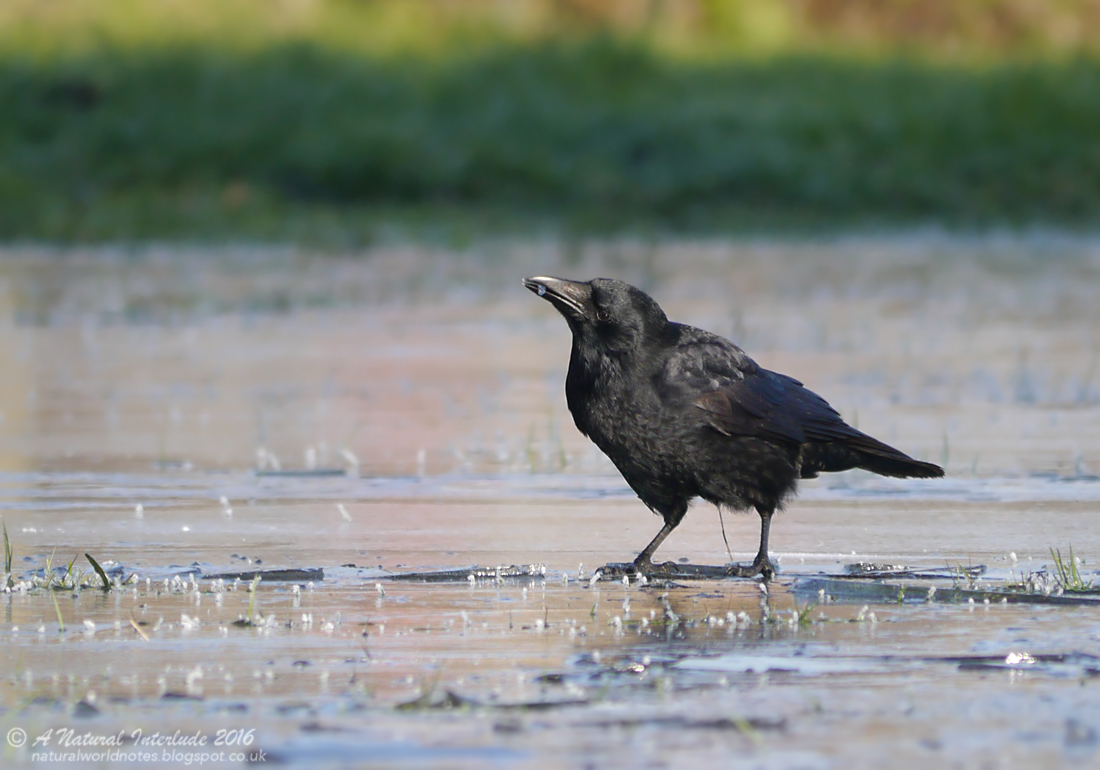 I came across a wintering Chiffchaff and both Kingfishers perched up in the sunshine on Wednesday. The female (below) was just down stream from the Reed Buntings, tucked into a tangle of branches. The male was fishing along the Bulbourne through Station Moor. It really was one of those extraordinary mornings, full of unexpected pleasures and sensations soothing to the soul. 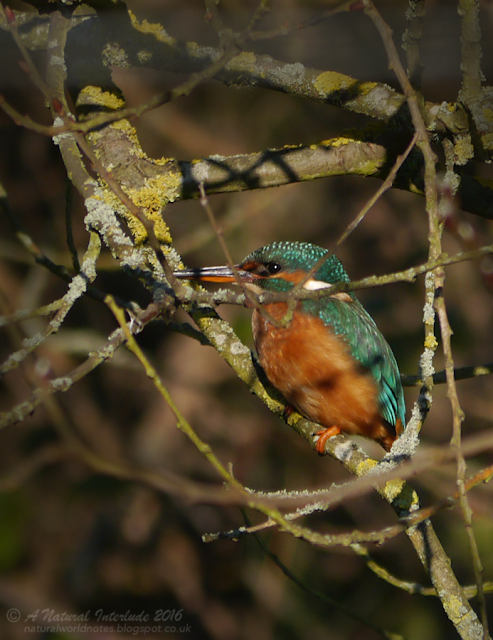 I hope I haven’t scared off the few readers I do have by delving into the mire of mental health. If you haven’t already run for the hills, I hope that by sharing a little of my situation, you’ll understand why there are periods - like the past few weeks - when blogging is more difficult or will need to be brief. Every so often, all my energy is suddenly taken up with putting one foot in front of the other and simply holding on while the mental chaos churns. In spite of a longing to connect and to be involved in a wider (on and off line) community, sometimes I cannot overcome the feeling of brittle tenderness to do anything other than withdraw. Thanks for reading and I hope to be back soon.
at 13:19:00

Email ThisBlogThis!Share to TwitterShare to FacebookShare to Pinterest
Labels: #itaffectsme, About Me, Health